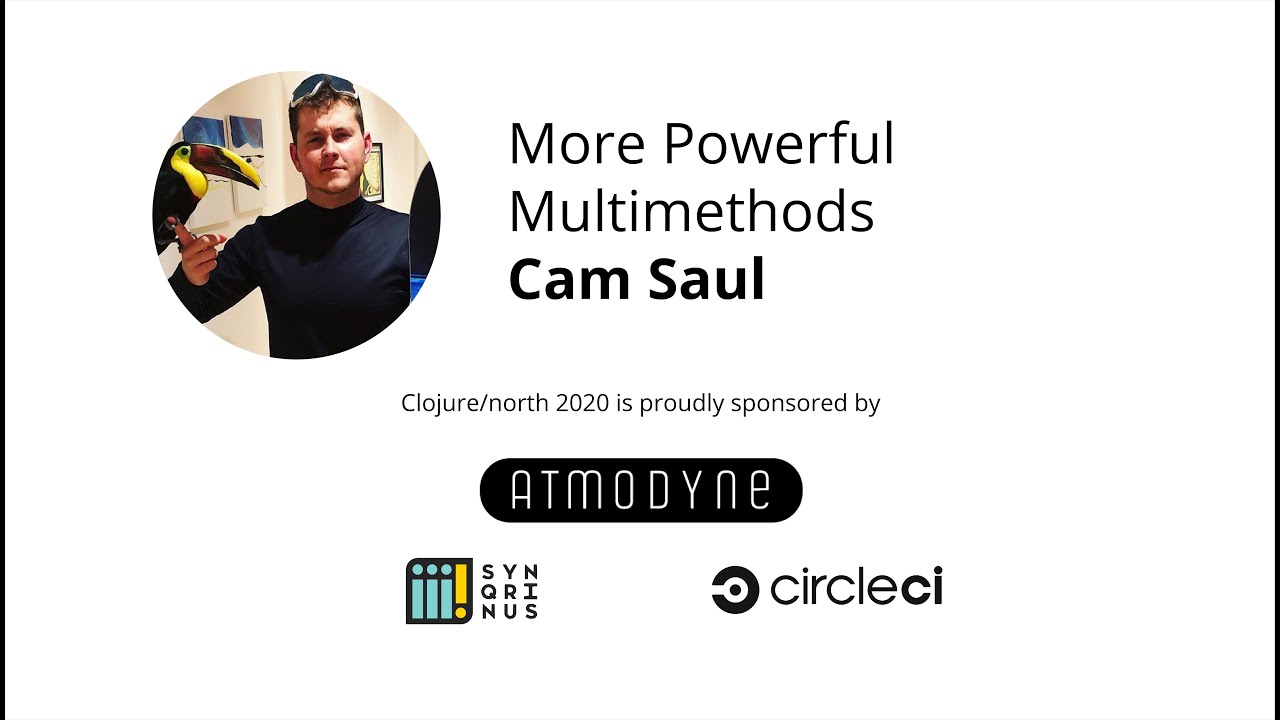 Methodical is a library that provides drop-in replacements for Clojure multimethods and adds several advanced features.

Inspired by the Common Lisp Object System (CLOS), Methodical methods can call the next-most-specific method, if they should so desire, by calling next-method:

This makes it easy to reuse shared parent implementations of methods without having to know the exact dispatch value of the next method. In vanilla Clojure multimethods, you'd have to do something like this:

If you're not sure whether a next-method exists, you can check whether it's nil before calling it.

Auxiliary Methods: :before, :after, and :around

All applicable :before methods are invoked before the primary method, in order from most-specific (String before Object) to least-specific. Unlike the CLOS, which ignores the results of :before and :after auxiliary methods, by default Methodical threads the result of each :before method into the next method as its last argument. This better supports Clojure's functional programming style.

:before methods unlock a whole new range of solutions that would be tedious with vanilla Clojure multimethods: suppose you wanted add logging to all invocations of a multimethod. With vanilla multimethods, you'd have to add an individual log statment to every method! With Methodical, just add a new :default :before method:

All applicable :after methods are invoked after the primary method, in order from least-specific (Object before String) to most-specific. Like :before methods, (by default) the result of the previous method is threaded thru as the last argument of the next function:

Around methods give you amazing power: you can decider whether to skip invoking next-method altogether, or even invoke it more than once; you can acquire resources for the duration of the method invocation with with-open or the like.

Method combinations are discussed more in detail below.

In most cases, this is what you want, and the least-annoying behavior. If you actually do want to define multiple aux methods of the same type for the same multimethod and dispatch value, you can give each method a unique key:

You can also use this key to remove specific auxiliary methods.

Getting the "effective method"

Perhaps one of the biggest limitations of vanilla multimethods is that they can't be passed around and modified on-the-fly like normal functions or other Clojure datatypes -- they're defined statically by defmulti, and methods can only be added destructively, by altering the original object. Methodical multimethods are implemented entirely as immutable Clojure objects (with the exception of caching).

Note that when using these programmatic functions, primary and :around methods are each passed an implicit next-method arg as their first arg. The defmethod macro binds this automatically, but you'll need to handle it yourself when using these functions.

Every operation available for Clojure multimethods, and quite a few more, are available with programmatic functions like add-primary-method.

Clojure's multimethods, while quite powerful, are somewhat limited in the ways you can customize their behavior. Here's a quick list of some of the things you can do with Methodical multimethods, all of which are simply impossible with vanilla Clojure mulitmethods:

To enable such advanced functionality, Methodical multimethods are divided into four components, and two that manage them:

The method combination, method table, and dispatcher are managed by an object called the multifn impl, which implements MultiFnImpl. If this impl supports caching, it manages a cache as well, albeit indirectly (thru its implementation of the method effective-method.) The default implementation is actually a combination of two multifn impls: cached-multifn-impl manages a cache and wraps standard-multifn-impl, which itself retains the other three components.

You can use alternative components directly in the defmulti macro by passing :combo, :method-table, dispatcher, or :cache:

When constructing multimethods programmatically, you can use standard-multifn-impl and multifn to create a multimethod with the desired combination of components:

Component implementations that ship with Methodical

Methodical offers debugging facilities so you can see what's going on under the hood, such as the trace utility:

Methodical is built with performance in mind. Although it is written entirely in Clojure, and supports many more features, its performance is similar or better to vanilla Clojure multimethods in many cases. Profiling results with Criterium show Methodical performing up to 20% faster in some cases:

There is still room for even more performance improvement!

Distributed under the Eclipse Public License, same as Clojure.