A ClojureScript library for programming with Facebook's React framework.

Facebook’s React framework brought a wonderful programming model to user interface development on the web. With React, your UI is the result of a pure function application with your application state as input. A change in your app state signifies advancement of (logical) time. At every point in logical time your UI is (conceptually) entirely rerendered. 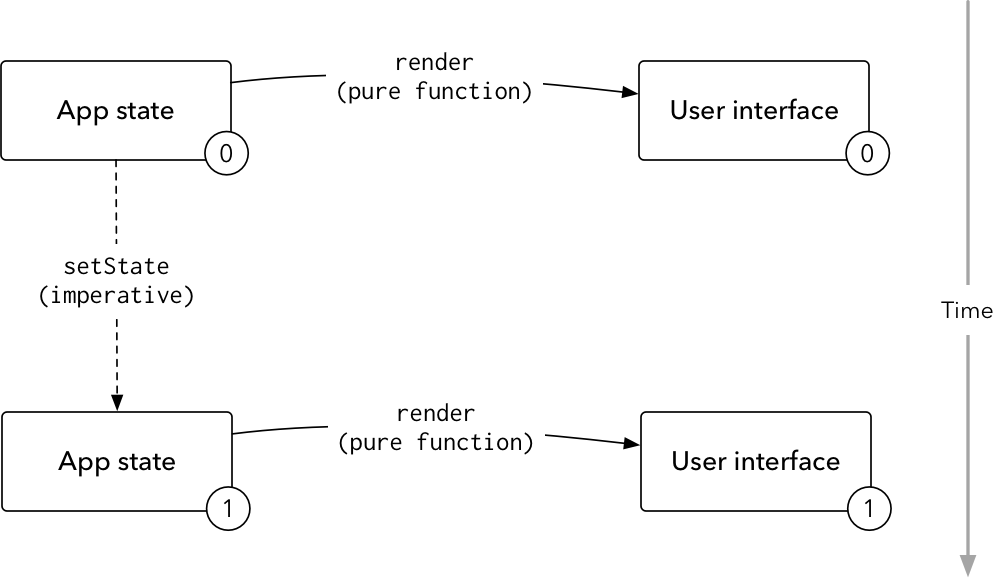 With React, the transitions in logical time (a.k.a. your business logic) are driven and managed implicitely by imperative calls to setState. Reacl improves on this model by decoupling the triggering of change (send-message!) from the pure handling of application state transitions (handle-message).

Advancement of logical time is now driven by calls to send-message!. The messages you send are then handled by the components in their handle-message functions, which are functionally pure descriptions of your business logic. The messages encode the change that happens in your application as values. This leads to good design, ease of reasoning, and general peace of mind.

The reacl2.dom namespace can be used independently. While reacl2.core depends on reacl2.dom, it could also be used directly with React's virtual-DOM API or other DOM binding.

A minimal Reacl component consists of a name, some application state, some arguments, and a render function.

The render clause lets you define a function going from your components app state to a virtual DOM tree. So far this is mostly a 1-to-1 translation of the corresponding React component.

We now want this clock component to update every second. With React you would start a timer that called a method of your component and in that method you would call setState which in turn triggered the component to rerender. In contrast, with Reacl, the timer merely sends a message to the component. The message holds a representation of the action that occurred: the advancement of time. This forces you to think about the actions in your application as values. It also decouples triggers (the impure world) and your business logic (the pure world).

You can set up the timer in a component-did-mount clause. You use send-message! to send a message to a component.

Every 1000ms the component receives the message. The message handler defined in the handle-message clause has to compute a new application state depending on the contents of the message and its current app state.

The component is now re-rendered with the new app state. Notice how we never set any state explicitly by calling something like setState. We only sent a message. The component’s handle-message function is a functionally pure description of your business logic.

Components can easily be composed. You just use a component's name as a function when you construct a virtual DOM tree.

Here we define a component that holds two clocks. The two clocks work completely independently. Each component's application state (the date and the number of ticks) is only directly accessible within the component itself. There is no global application state. This makes composition a lot easier because you don't have to think about the allocation of resources inside a global store.

App state represents something that's important to your application. In some situations you need a different kind of state, something that's just an aspect of the GUI but not yet tracked by the DOM. Therefore Reacl provides you with the notion of local state.

The central idea of Reacl is this: Reacl programs are pure. They (mostly) do not need to call imperative functions to get anything done. This goes well with React's philosophy, but goes a step further as well as making programming more convenient.

This idea has immediate consequences on how Reacl organizes data that is communicated between components. In React, a component has properties and state, where properties typically carry arguments from one component to its subcomponents.

In Reacl, there are three different kinds of data:

(These can all be arbitrary ClojureScript objects, and are not restricted to JavaScript hashmaps.)

The key to tying these aspects together are the reacl2.core/defclass macro for defining a Reacl class (just a React component class, but implementing Reacl's internal protocols), and the reacl2.core/send-message! for sending a message to a component.

Check out the very simple example for managing a to-do list in file examples/todo/core.cljs (don't expect TodoMVC). We use this namespace header:

First of all, we define a record type for to-dos, with a unique id (needed to identify items to be deleted), a descriptive text and a flag indicating that it's done:

Here is a component class for a single item, which allows marking the done? field as done and deleting that item:

The component class defines a render expression. The code creates an input DOM element, binds it to checkbox via dom/letdom (because the event handler will want to access via dom/dom-node), and uses that to create a div for the entire to-do item.

The message handler specified as the onChange attribute extracts the value of the checked flag, and sends it as a message to the component this with the reacl/send-message function.

There is also an event handler attached to a Zap button, which is supposed to delete the item. For this, the component needs the help of the parent component that manages the list of components - only the parent component can remove the todo item from the list. The message it sends to parent is made from this record type:

We'll need to handle this type of message in the class of the parent component.

For the list of todo items, we define a record type for the entire list of todos managed by the application, in addition to the id to be used for the next item:

The list component accepts the following messages in adddition to Delete:

Each to-do-item component is instantiated by calling the class as a function, passing its app state (the individual todo item), and any further arguments - in this case this is passed for to-do-item's parent parameter. The reacl/opt argument provides options for its call, in this case specifying a reaction.

The reaction is a slightly restricted version of a callback that gets invoked whenever the component's app state changes. (Remember that a todo item's app state changes when the user toggles the done checkbox.) The reaction here (reacl/reaction this ->Change) - says that a message should be sent to this, the to-do-app component, and that the app-state (the todo item) should be wrapped using the ->Change constructor. So, a Change message is sent to the to-do-app component whenever an individual todo item changes.

This component supports two different user actions: By typing, the user submits a new description for the to-do item in progress. That is encoded with a New-text message. Also, the user can press return or press the Add button, which submits the current to-do item in a Submit message. The event handlers for these actions send these objects as messages.

The to-do-app class has more clauses in addition to render.

The local-state clauses gives the local state a name (in this case, local-state), and the expression "" initializes the text entered by the user to the empty string:

The handle-message function finally handles all the different message types. The New-text message leads to a new local state being returned:

A Submit message leads to the text field to be cleared and the app state to be augmented by the new todo item, generating a fresh id:

The Delete message sent by an item prompts the message handler to remove that item from the list:

Finally, the Change message leads to the todo item in question to be replaced by the new version:

That's it. Hopefully that's enough to get you started. Be sure to also check out the products example or the comments example

The following commands run the tests defined in test-dom and test-nodom, respectively. To execute them, karma is needed.

You may substitute chrome-headless with a runner of your choice.