Saite is a Clojure(Script) mini "client/server" application for exploratory creation of interactive visualizations based in Vega-Lite (VGL) and/or Vega (VG) specifications. These specifications are declarative and completely specified by data (JSON maps). VGL compiles into the lower level grammar of VG which in turn compiles to a runtime format utilizting lower level runtime environments such as D3, HTML5 Canvas, and WebGL.

Saite has progressed a great deal even from the Aug 29 presentation. Loads of stuff mentioned in the futures there are now implemented, including server side code execution, mixing of server and client side code execution, loading from URLs, full paredit support for editors, and more.

Some of the new things in this release:

As indicated, there is now a full self-installing JAR, which will also install the MKL libraries necessary for Neanderthal as well as a default config.edn file. For the MKL libs, at the time of this note (13-Oct-2019), Linux 64bit and MacOS 10.11+ 64bit are supported. Windows is intended.

For the self installing JAR, you can grab it with this (note, new versions are coming out fairly often and these versions will be reflected here):

You need Java-8. At present it will not run properly on 9+ due to all the non backward compatible changes there (in particular dynamic dependencies do not yet work on 9+). But Java 8 seems to be the platform most (80% I think) JVM users still use. And in any case would be easy to get.

Once you have the uberjar and Java 8, you can install with this command:

Once installed it is best to move the standalone.jar to the home/install directory. The run scripts are setup to expect the jar in ~/.saite. However, you can also run it with (for example on Linux from a terminal session):

As you probably know, nohup just keeps the app running if you exit the terminal session. --port is where the web server is listening. --repl-port is where you could connect emacs / cider, but it uses nrepl 0.2.13 so you would need something compatible with that. In any case, you don't really need to connect to the nrepl (and I find myself never doing that actually...), especially as you can execute server code from the client.

Connect by pointing your browser at localhost:3000. Once in, next click on the 'Upload Document' button (standard icon for this - and all the buttons have tooltips). Then click the URL checkbox. Then put this URL in:

and click the check/OK button. This will load a new version of the document I presented. There is expanded walk through commentary in the 'Templates', 'Tabs', and 'Picture Frames' tabs. Additionally some of the commentary (especially in the 'saite' tabs) has been updated. Finally there is a new 'Gallery' tab with full walk through comments in the code.

All the 'interactive document' tabs have their editor panels closed on load (that's how the doc was saved). You can open and close them with the 'Open Editor Panel' and 'Collapse Editor Panel' buttons. Once open you can use the slider to adjust how much is showing.

The editors are emacs - most of the usual base emacs stuff is available. I haven't actually checked, but if you configure the editor to be vim or sublime a lot of stuff will still work - including 'key-chords'. To get a quick overview of the default (as from the default config.edn) text manipulation and sexp navigation, various code execution capabilities, and frame visualization capabilities (and their key bindings) click the '?' "Quick Help" button at the upper right. A lot of this is also gone over in the walk through commentary. You can clear output area panels with the 'open circle' button at the left of editor panels (you may need to pull the slider to the right to make this visible if the panel was collapsed). Ctrl-X Ctrl-B will also work.

Do not use the editors in the <-> tab for any code execution. They are not intended for that - only for converting between JSON and Clj Vega/Vega-Lite specification code.

To entice you a bit, here is some code snippets (from a real session) showing server and mixed server / client code.

The key thing here is to pay attention to which evaluator to use (which key chord). In particular, mixed code, code with a clj form in it, can only be correctly run with Ctrl-X Ctrl-C. If you (accidently or otherwise) use Ctrl-X Ctrl-J (run outer sexp on JVM), Ctrl-X J (run last sexp on JVM), or Ctrl-X Ctrl-E (run last sexp on client), you will get an error saying the clj symbol is not resolvable. That's because it actually doesn't exist - there is no clj operator. Mixed code is dealt with via a re-write transformation where the clj disappears and async messages (to and from the server) and channels for synching are used in the implementation.

To try this, you can simply click the 'Add Interactive Tab' button, then click 'Editor and Output', then click check/OK button. Just select/copy the following and paste into the left editor panel (the right is the repl/output buffer). Pay attention to the comments to make sure you use the 'correct' evaluators...

Saite is a Clojure(Script) mini "client/server" application for exploratory creation of interactive visualizations based in Vega-Lite (VGL) and/or Vega (VG) specifications. These specifications are declarative and completely specified by data (JSON maps). VGL compiles into the lower level grammar of VG which in turn compiles to a runtime format utilizting lower level runtime environments such as D3, HTML5 Canvas, and WebGL.

Typical work flow starts by requiring aerial.saite.core and running the start function which takes a port. This port is for the websocket messaging. Browsing to this port on localhost will open the viewer.

Visualizations are formed from parameterized templates which are recursively transformed into legal VGL or VG specifications. In Saite, creating and transforming these templates is generally done on the server side in typical REPL style development. Transformed templates (with their data or data source) are sent to one or more sessions (brower viewers) for rendering.

In versions 0.3.1+, there is CodeMirror editor support for creating templates on the client side and rendering them via a modal panel popup. There are serveral issues concerning the expansion of this to support more full notebook oriented documents.

Saite also functions as an example application built with Hanami. As such it has all the capability of Hanami's template system and recursive transformation of parameterized templates.

Saite also uses of the tab system provided by Hanami for automatic tab construction and updates, plus the application specific tab capabilities of that system. Further, Saite makes use of Hanami's visualization messaging system, in particular, the user-msg multimethod with implementations for the :app-init user msg as well as the :data msg for streaming data plots/charts.

In addition, Saite also makes use of header support via the default-header-fn. This creates a simple page header giving session support: a 'session name' for a session as well as an input area to change the name of the session. Updating is based on session name - all sessions with the same name will get the same updates from the server.

To install, add the following to your project :dependencies:

Browse to localhost:3000 and you will see an initial session page: 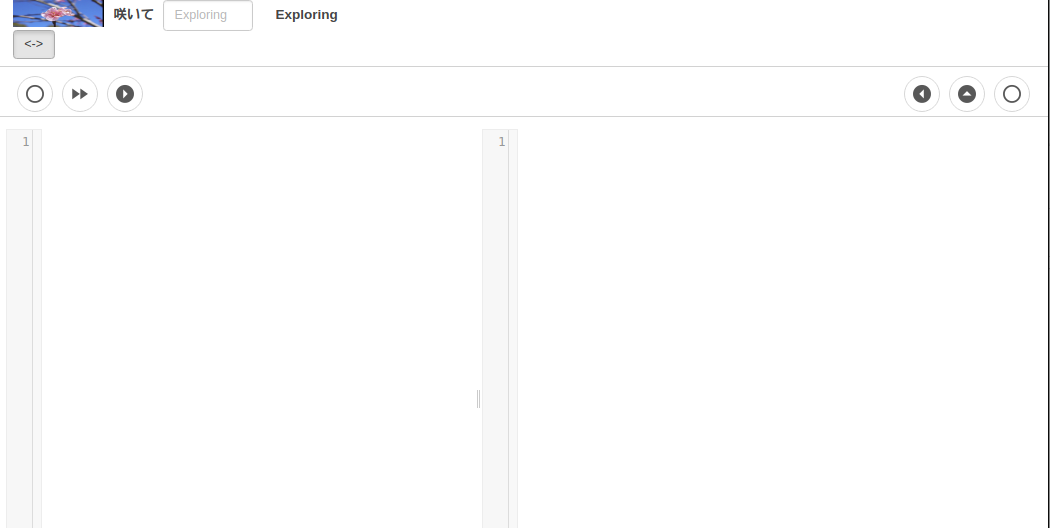 The [<->] tab will be current upon startup. It holds the resources for converting JSON VG/VGL to Clj and Clj VG/VGL (including templates) to JSON. Both areas are code editors CodeMirror. The left editor is where you can type (or more typically paste) a JSON VGL specification. The caret-right button converts to Clj and renders in the right editor pane. Clicking the double (fast-forward) arrow button first compiles the (expected) VGL code to VG and then converts to Clj. The open buttons for each editor clear their respective editor panels.

Lastly the caret-up button over the Clj editor will render the Clj specification in a modal panel popup window. This supports rapid exploration on the client as you can edit the Clj pane and reclick to see the results.

As a first example, the following shows an overlay+detail VGL specification, translated to VG and rendered as Clojure. 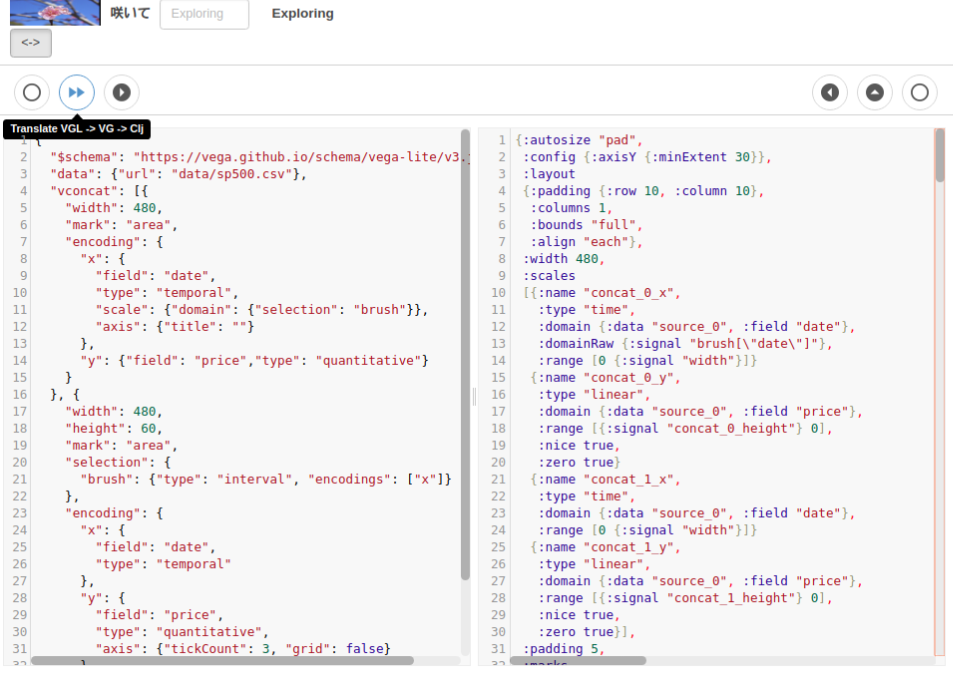 Here is an example where we translate a Clj specifications for an area chart, using the hanami template for area charts, over to its JS/JSON Vega-Lite specification. 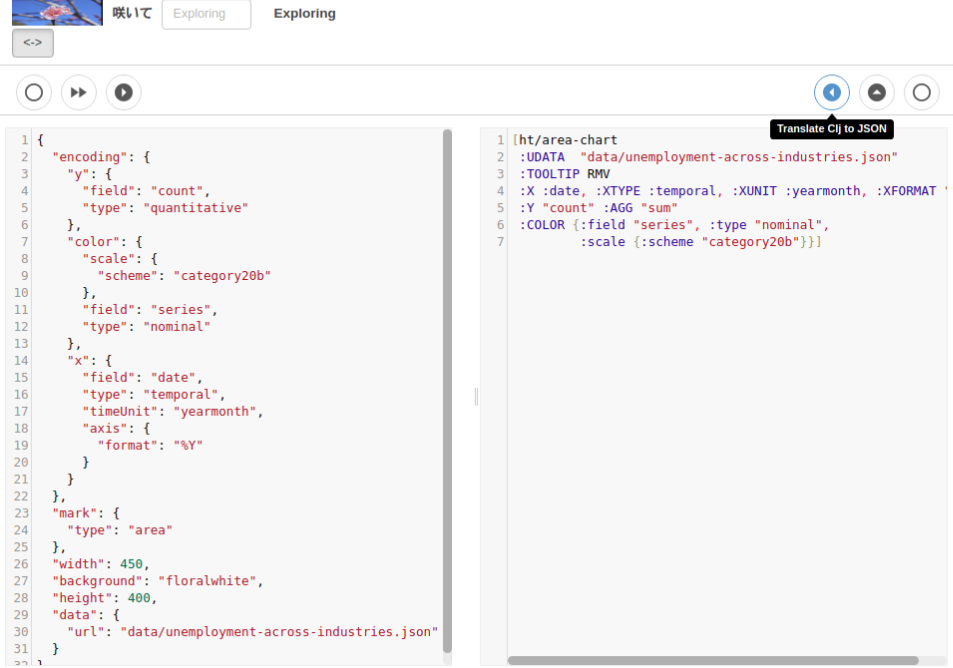 Next we render this specification in a modal panel popup by clicking the caret-up button: 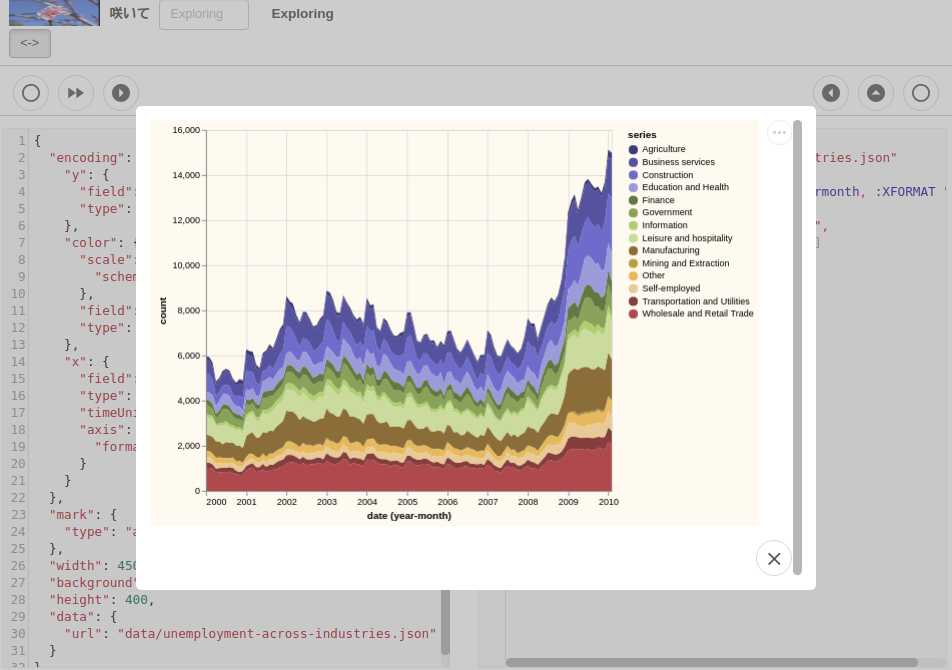 The following will create an example plot in the default tab 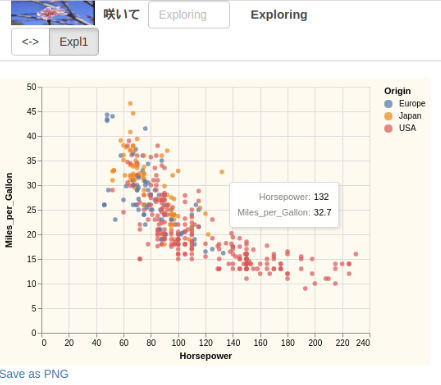 Each new rendering will overwrite the content of the tab. Also, the default tab need not be used - just specify a tab id in all your specifications.

Any number of other tabs may be specified, with all manner of text based (hiccup and re-com enabled) areas to picture frames (frames) with descriptive areas (top, bottom, left, and right) surrounding visulaizations. There may be any number of visualizations (with or without picture frames) and/or empty frames (textual areas) per tab.

User meta data is used to communicate information about such things as which tab to use, the tab's options, whether the template is Vega-Lite or Vega, et. al. This meta data is contained in a map associated with substitution key :USERDATA for VGL/VG specification key :usermeta. The :usermeta key is recognized by VGL/VG and explicitly ignored by their processing. All your templates (or explicit specifications) need to supply :usermeta as a key with either explicit values, or more typically (and usefully) a value of :USERDATA which the recursive transformation will then transform to a value. For example, here is what the ht/point-chart template looks like:

Saite sets a variety of defaults for :USERDATA as follows:

The TLBL value is an example of a substitution key which is a function. Such functions are passed the current substitution map as an argument during recursive transformation. So, in this case, the current tab will get a label that is the capitalized string of the :TID value. The :TOPTS provides a way of describing the layout of independent visualizations. Visualizations that are independent are those that are separate VGL/VG renderings. So, they constitute different/independent VGL/VG specifications.

All of these values can be changed, either via a call to hc/update-defaults or per visualization by explicitly supplying them to the hc/xform function. For example, in the following, we specify a new tab :dists. The tab label will automatically be set to "Dists" (you could override this with an explicit :TLBL k/v): 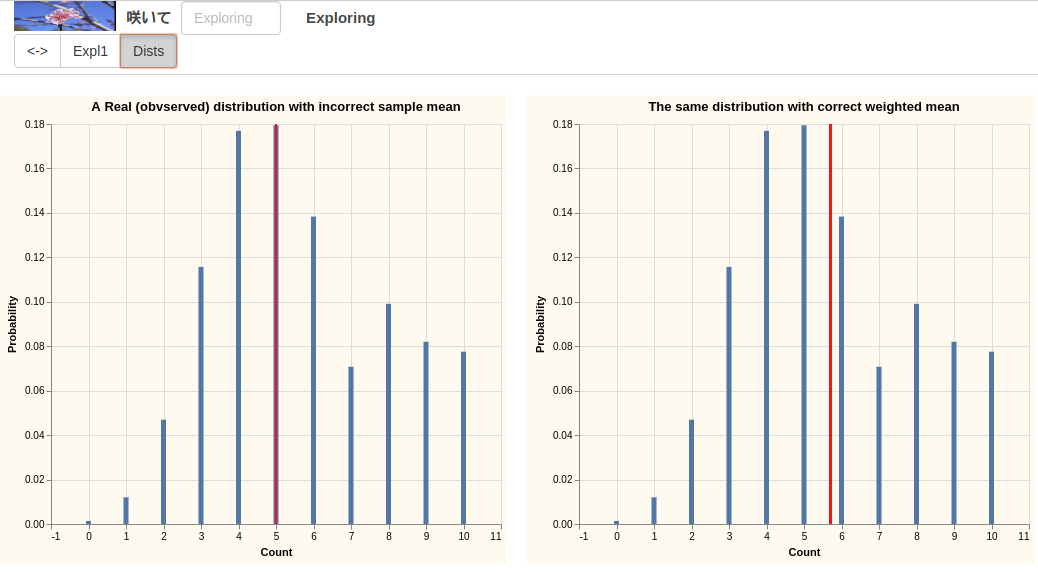 Exploring this a bit further let's look at four independent plots and charts. The actual visualizations are not particularly related - this is just to show the grid layout aspect (which is actually a direct Hanami capability). 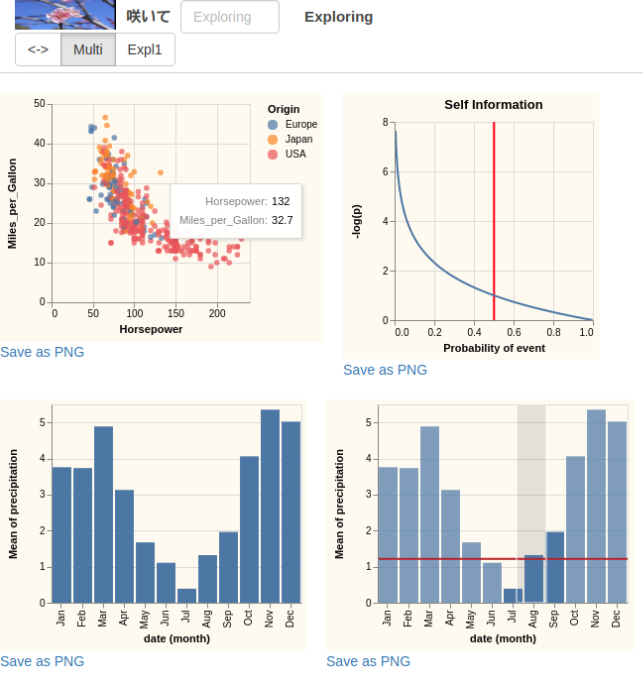 If we add :TOPTS {:order :col :size "none"} after the first :UDATA, the result will be: 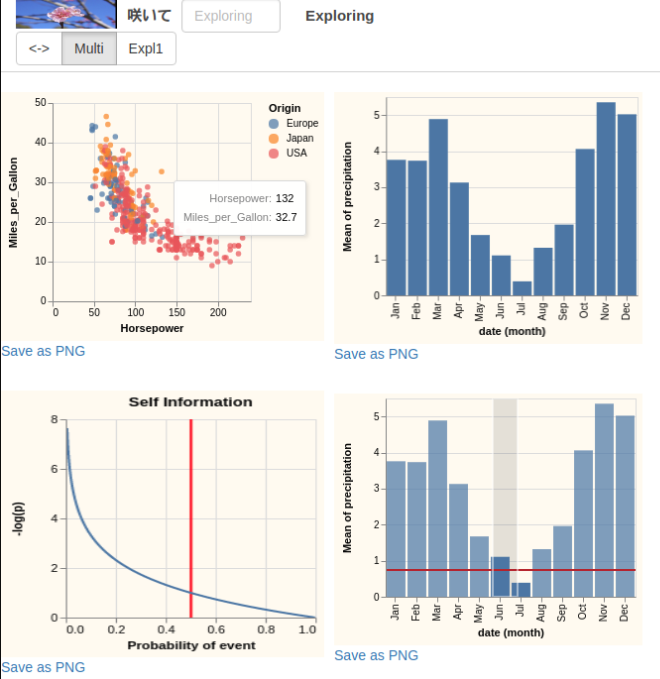