With Concordion, you can write high-level description of features in Markdown and document them with data examples. Hidden instrumentation (in the form of magic links) binds the examples to functions in your Fixture classes (or rather Clojure test namespaces, in the case of clj-concordion) making it possible to verify them against the code. When you run your test runner, Concordion also generates HTML files incorporating results of the passed or failed examples/tests, which you can publish for the business audience of your code. 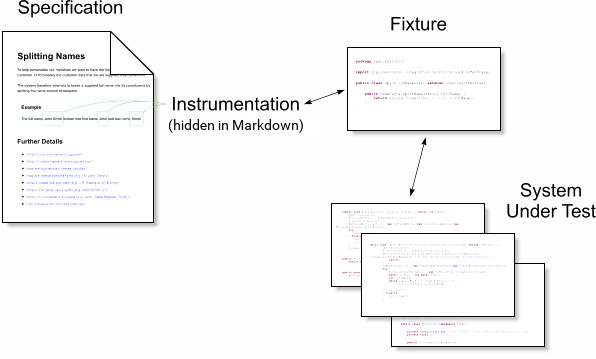 Concordion is very simple and is quite limited at what you can do in the .md files. That is IMO a very good thing. All the logic should be in code, the specifications only supply inputs, outputs, and simple test predicates.

I will not explain why to write Specification By Example (~ Behavior-Driven Development, BDD) tests and how to do that because the Concordion site does a great job of that. I highly recommend that you check it out first. If you want to see how it works in Clojure, have a look at the Coding section below.

TIP: clj-concordion exports clj-kondo config for you to import so that Kondo understands its macro.

Add a dependency on this project (copy the latest dependency specification for Lein/Boot/deps.edn/Gradle/Maven from Clojars):

(Depending on your build tool, you might also need to add an explicit dependency on org.concordion/concordion, see our project.clj.)

We start by writing a Concordion specification, such as <class path>/math/Addition.md containing the specification of a feature, with examples:

The last line would render as

or rather, with indication of the success:

NOTE: The Concordion Instrumenting docs explain how these "magical" links work so only a brief summary: 1 and 3 are stored into the "variables" #n1 and #n2 and then we verify that 4 equals to the result of calling the function add with these arguments.

So you need to implement the function add in a test namespace with a clj-concordion fixture. The name of the ns needs to match the directory of the .md specification + -test (here: math/ -> math-test) and it needs to (deffixture <name of the md file>), as we see below:

(You can explore clj-concordion's own .md specs and the corresponding fixture code.)

You can open the .html file to see the .md file rendered with results of the tests.

We use our own expression evaluator instead of Concordion's OGNL one, which has some consequences, both positive and negative.

The expressions are a subset & superset of EDN and thus:

See the Expression specification for details.

The options map replaces Concordion annotations on test classes (e.g. using :concordion/impl-status :unimplemented instead of @Unimplemented, an individual :concordion.option/<option-name> instead of @ConcordionOptions(<optionName>=..), @FailFast(onExceptionType={DatabaseUnavailableException.class}) -> :concordion/fail-fast-exceptions [Throwable]) etc.), annotations on test methods such as Before and After Hooks, and exposes additional configuration (see below).

The opts argument to deffixture can also contain setup/tear-down functions run at different points of the lifecycle:

Troubleshooting: Fail fast upon an exception or a failure

You can instruct clj-concordion to stop at once when a test fails or throws an exception so that you can examine the runtime state. Use the following options:

(Notice that it is only meaningful to include both options if you use fail-fast-exceptions to limit to subclass(es) and fail-fast true so that it also stops for test failures.)

To be able to run tests repeatedly from the REPL, you need to reset the previously cached results:

Warning: The specification with the fixture seems to have no asserts

This warning is logged when the result from Concordion has zero all of the success, failure, and exception counts. It is OK to ignore if your .md file has indeed no asserts and you can disable it by setting the options {:cc/no-asserts? true} on the deffixture. But if the spec has asserts and you expected to see some results then something went wrong. Enable debug logging as described above, check carefully the output (also the terminal if you connect to a remote REPL), try to debug to find out what is Concordion doing.

Stable. We expect small releases with bug fixes and occasional additional functionality as requested by the library users.

NOTE: Concordion normally uses OGNL to map function calls and property access in the specification to the fixture class. We replace it with our own evaulator so that we don't need to generate classes from Clojure.

How is a specification test invoked:

There's 2 places where the test runner is called:

Indirectly, from a Concordion Suite, when the concordion:run command is encountered in a specification, spawning a new test within a test. If you want to support the concordion:run command, this is where the Runner / DefaultConcordionRunner comes in. By default ConcordionBuilder plugs in a SystemPropertiesRunnerFactory which lets you override the Runner with a system property. If this doesn't suit, we could open up withRunnerFactory as an extension method - rather than overriding RunStrategy which is designed to cater for different strategies for invoking the Runner.

Can you improve this documentation? These fine people already did:
Jakub Holy & Jakub HolýEdit on GitHub