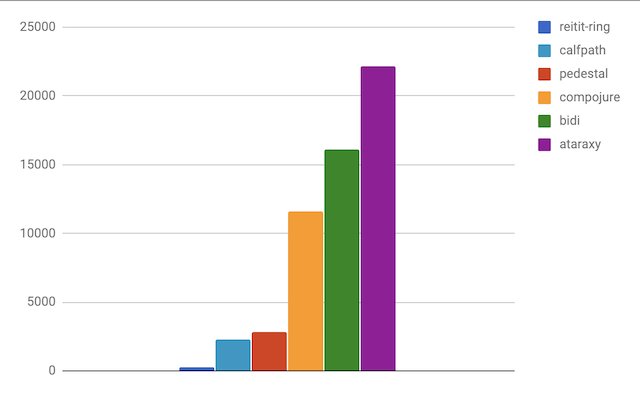 Well, it depends. With small route trees, it might not. But, with large (real-life) route trees, difference between the fastest and the slowest tested libs can be two or three orders of magnitude. For busy sites it actually matters if you routing request takes 100 ns or 100 µs. A lot.

Reitit + jsonista + pohjavirta is one of the fastest JSON api stacks in the tests. See full results here.

All perf tests are found in the repo and have been run with the following setup:

NOTE: Tests are not scientific proof and may contain errors. You should always run the perf tests with your own (real-life) routing tables to get more accurate results for your use case. Also, if you have idea how to test things better, please let us know.

Based on the perf tests, the first (static path) lookup is 300-500x faster and the second (wildcard path) lookup is 18-110x faster that the other tested routing libs (Ataraxy, Bidi, Compojure and Pedestal).

But, the example is too simple for any real benchmark. Also, some of the libraries always match on the :request-method too and by doing so, do more work than just match by path. Compojure does most work also by invoking the handler.

So, we need to test something more realistic.

To get better view on the real life routing performance, there is test of a mid-size rest(ish) http api with 50+ routes, having a lot of path parameters. The route definitions are pulled off from the OpenSensors swagger definitions.

Thanks to the snappy Wildcard Trie (a modification of Radix Tree), reitit-ring is fastest here. Calfpath and Pedestal are also quite fast.

Another real-life test scenario is a CQRS style route tree, where all the paths are static, e.g. /api/command/add-order. The 300 route definitions are pulled out from Lupapiste.

Both reitit-ring and Pedestal shine in this test, thanks to the fast lookup-routers. On average, they are two and on best case, three orders of magnitude faster than the other tested libs. Ataraxy failed this test on Method code too large! error. 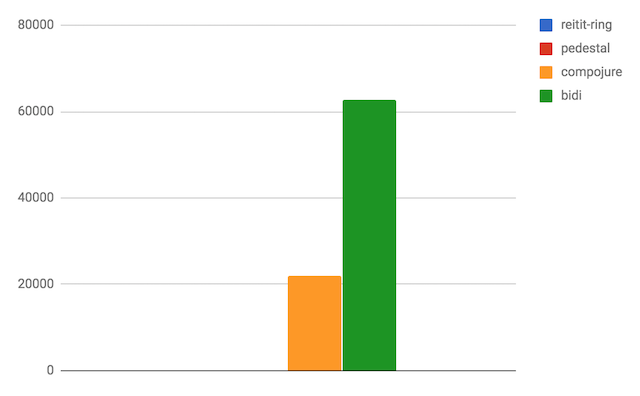 NOTE: in real life, there are usually always also wild-card routes present. In this case, Pedestal would fallback from lookup-router to the prefix-tree router, which is order of magnitude slower (30x in this test). Reitit would handle this nicely thanks to it's :mixed-router: all static routes would still be served with :lookup-router, just the wildcard routes with :segment-tree. The performance would not notably degrade.

The reitit routing perf is measured to get an internal baseline to optimize against. We also want to ensure that new features don't regress the performance. Perf tests should be run in a stable CI environment. Help welcome!

Looking out of the box

By default, reitit.ring/ring-router, reitit.http/ring-router and reitit.http/routing-interceptor inject both Match and Router into the request. You can remove the injections setting options :inject-match? and :inject-router? to false. This saves some tens of nanos (with the hw described above).

NOTE: Without Router, you can't to do reverse routing and without Match you can't write dynamic extensions.

Few things that have an effect on performance: