A ClojureScript library to interactively visualize and edit clojure collections 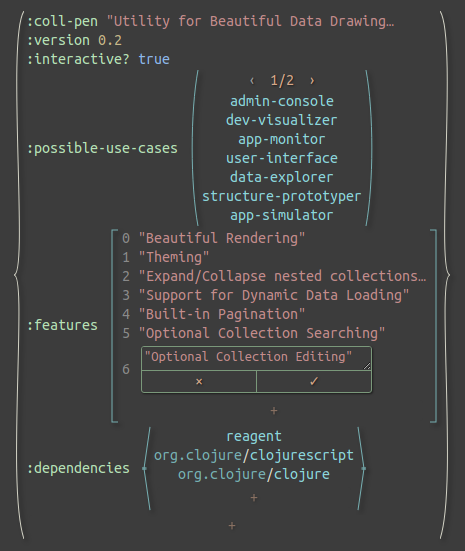 Coll-pen renders clojure collections as interactive elements using reagent. It was generally built for development or internal use, and is great for examining the state of an app. That said, it can certainly be used as a component in end-user applications as well.

Additionally, it is fully keyboard navigable and designed with accessibility in mind.

Check out the demo

There is one main function, coll-pen.core/draw which takes one or two parameters

The other available functions are:

The display and editing functionality varies between the four main collection types:

Note how the last item [:element] is not rendered as a collection because a sequence is not an associative structure.

Note how the map key [1 2], despite being a vector, is not rendered as an interactive collection.

Contributions and feature requests are welcome.

Feedback on accessibility would also be appreciated, as I am trying to improve my understanding of accessibility to better support all users in my projects.